As I begin to write this post, I’m sure I’ll run out of superlatives before I’m finished. The day was, breathtaking, awesome, inspiring, incredible, etc.

I mentioned yesterday that I was going through the Grand Staircase-Escalante National Monument in the morning. The Bureau of Land Management describes it, “Grand Staircase-Escalante remains the largest national monument in the United States – spanning 1.9 million acres of America’s public lands. A landscape roughly the size of Delaware, the Monument was the last place in the continental United States to be mapped.” Route 12 meanders through the park for 125 miles. My zoom lens had difficulty with the wide panoramic views so just click on this link for a google search of images in the park. Amazing ride with the twisting road and the scenic vistas. I wanted to get a GoPro camera to put on my helmet but decided against it. I’m going to get one for sure before my next big trip. Here’s a short video of a drone over my favorite section called the Hogsback. 2000 foot drop off in both directions. It was jaw dropping. I literally screamed with joy as I went through this section. Oh, and did I mention, there were cattle every couple  of miles right in the road.  Much of the area is Open Range.

I got some great advice from a Harley guy about where else to go in the area. So with plenty of time left in the day, I took the guys advice and headed towards Zion National Park. The website mentioned arriving 90 minutes early at the main attractions because of the crowds. I’m not big on crowds so I decided to just drive through and see what I could see. There was a line at the entrance as it cost $30 to get in. It was free with my Senior Card. After about 15 minute wait, I was in the park. About a 1/2 mile from the entrance, the view was really good. A place called checkerboard mesa It just got better from there. The traffic wasn’t too bad but those damn rental RV’s are a pain in the ass. I have been fighting them this whole trip. This time of year, many of them have been rented by Germans and I met many, many Germans who vacation in the states often. There’s a couple of cool tunnels and plenty of switchbacks and twisties along the road too.

The guy on the Harley said it’s possible to turn around at the end of the road and come back and head for the North Rim of the Grand Canyon. He said it would be a long day but there was still plenty of daylight so I went for it. I was planning on camping in the area because I knew there were no rooms available. So the first thing I saw was a sign indicating camping sites were sold out. We’ll deal with that when I leave the park. The North Rim is not nearly as popular as the South but it has the better views. 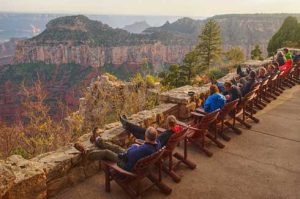 There is a lodge right on the edge with a spectacular view. There’s a huge deck to enjoy a beer and just take in the scenery.

There’s also a viewing deck that you get to down a flight of stairs. If you’re afraid of heights you won’t want to go there. I hung on  to the guard rail the whole time. It was breathtaking. I couldn’t leave. Mother Nature really outdid herself. 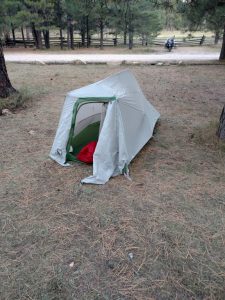 So now it was time to find a campsite. I spoke to the ranger at the entrance and he indicated I could pitch my tent anywhere on BLM (bureau of land management) property. All I needed was a flat spot to pitch the tent. The problem was it was going to be cold in the upper elevations and windy with little cover in the lower areas. Also, if I drove too far I would be in Indian Reservations and totally screwed. I found that out in South Dakota a few days back. Fortunately, I found a campground with tent spaces and I was set for the night. There was a bit of shelter from the wind but it was fun trying to pitch the tent.

This was a day to remember. 3 unbelievable trips all in the space of a day. The Trifecta! More pictures in the gallery

One thought on “Day 15, Sensory Overload”