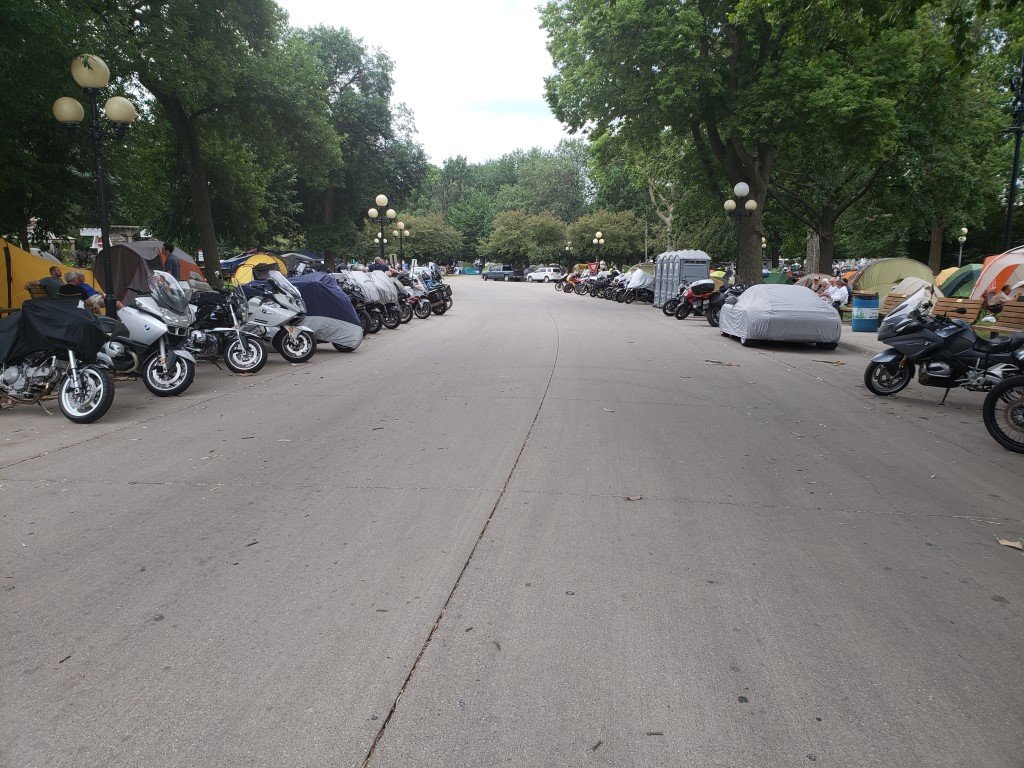 Once a year, BMW Motorcycles Owners Association (MOA) sponsors a national rally. They rotate between 4 different zones within the country. This year the rally was held at the Iowa State Fairgrounds in Des Moines and about 5000 attended.

I was planning on leaving mid morning on Tuesday, the 10th. My battery was showing signs of weakening so I was having one come in via FedEx the day I left. FedEx usually comes fairly early in the day but, of course, today they weren’t going to cooperate. I finally just left about 5:00. The package arrived at 5:30. Fortunately, the old battery didn’t cause any problems. The plan was to take the late ferry out of Muskegon and spend the night in Milwaukee. Just as I was leaving, I got a robo call from Lake Express and was told the ferry had mechanical problems and my trip was cancelled. So I decided to just take the super slab across I94 and beyond. I pulled into a motel somewhere near Gary, IN for the night. I try to avoid the Interstates because they are boring and the truck traffic is usually miserable. Fortunately, traffic was light and the trip was uneventful.

I arrived at the Fairgrounds in the late afternoon the next day (Wednesday), got registered and went looking for my campsite. I decided to go the luxury route and signed up for a concierge  service that provided tents, and other goodies. Got settled in and went exploring. The rally didn’t officially open until the next day but many people had arrived and were setting up their campsites. There was plenty of good camping sites sprinkled around the fairgrounds. Man, it was hot! Almost 100 degrees and really humid. This was going to be a long weekend.

I was looking forward to this event for several reasons. The first was the great multitude of seminars throughout the weekend. Topics ranged from bike maintenance to international travel. I would attend seminars most of the day. The second thing I was excited about was the large number of vendors who would be at the show. I could touch and feel all the parts, take advantage of show discounts and even have the items installed for free by the vendors. This could prove to be an expensive weekend. Among other things, I purchased a pair of custom fitted ear plugs with built in speakers. Looking forward to their arrival here at the house. I was also looking forward to just socializing with a bunch of like minded motorcyclist.

The rally certainly lived up to my expectations and I will plan to attend next years rally in Tennessee. Des Moines is a cool town with lots of great places to eat. They have decided to move the date up a month to June to try to avoid the hotter temps. Last years rally was in Salt Lake with temps above 100 the whole weekend. Global warming???

After a great weekend, I took off early Sunday morning for the trip back. I planned to stay in downtown Milwaukee and then take the 6 am ferry across Lake Michigan to Muskegon. I left about 5:30am to avoid the heat but ran into dense fog once I got out into the Iowa countryside. I stopped for a leisurely breakfast and hoped the sun would burn off some of that fog. It did. I planned on stopping at the National Motorcycle Museum in Anamosa, IA. It was a great stop with lots of cool motorcycles to see. I have included a photo album of the museum.

Got up early the next morning and headed out to the ferry launch. The ride across the lake was cool and fast. The ferry is a catamaran and went across the lake in under 2.5 hours. It has a top speed of 39mph. The lake was glass smooth and I got a bit of reading in during the journey. Once in Michigan, I took off on 46 and found a great little diner in Kent City and had a wonderful breakfast, including some of the best home made toast I’ve had in a while. Then made my way across lower Michigan and arrived home in the afternoon. A great trip! There’s a few photos posted in the photo gallery and you can see my route here.