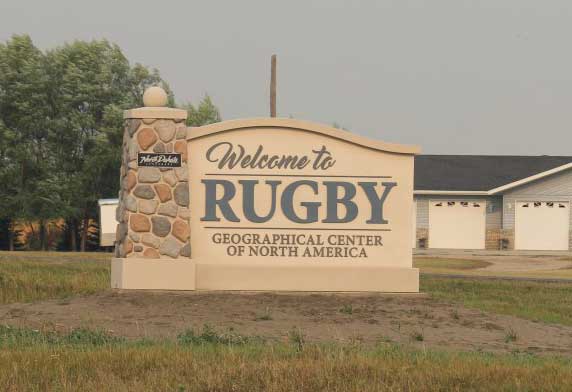 Got an early start this morning to take advantage of the cooling temps. Glad I did as you’ll see later. I had 2 friends who were stationed in Minot Air Force Base in North Dakota during the Vietnam era and I wanted to stop in to see it just so I could talk to my friend Joe Busch about the place. Minot AFB is a huge complex that has many of our ICBM missiles in underground silos sprawled out in the countryside. Joe and Jerry told stories of the legendary cold winters with temps so cold the parking lots had AC outlets to plug in your block heater for your car while you shopped. Anyway, there wasn’t much to see but I’m glad I went. I was disappointed that I couldn’t find any silos to explore. Joe told me to look for a fenced in area out in the middle of nowhere. Everything is underground. Couldn’t find any.

From there, I headed slightly south to the Garrison Dam on the Missouri River. Joe told me there were good camping areas below the dam and I was thinking of camping for the night. I got there way too early to stop for the day and the campgrounds were swarming with flies so I decided to move onward to South Dakota. As the day progressed, I noticed a haze but didn’t understand what it was. As the day progressed, it got worse and I realized it was smoke from the Montana forest fires. See the images of the dam in the photo gallery. Things got much worse as I headed West.

Rode down to Bismark and stopped to do a bit of shopping and then got lost in the traffic. Google got me out of trouble and I was headed down the shores of the Missouri in search of Lewis and Clark landmarks. It turns out there’s nothing along the shoreline and I soon was only able to see glimpses of the river. I rode through 2 huge Indian reservations, the Standing Rock Reservation and Cheyenne River Reservation. These were cool to go through but there were no hotels on the reservations. Well, they each had a Casino of course, but I wasn’t interested. So I was tired, hot, and the smoke was getting worse and no place to stop. I thought I might have to pitch a tent in a field someplace. I started to head toward the Mount Rushmore area because I knew they would have hotels. To get there would mean another 200 miles which would make the day 770 miles.

Fortunately I found a nice place in the middle of nowhere. 579 miles and about 12 hours on the road today. A small bar up the street served ice cold Coors Light and a good steak so I was happy. Slept well that night. Now on to Mount Rushmore. Hope I can see it through the smoke.

One thought on “Day 9, Lots of Booooring Miles”